Sad news to report, singer Blowfly has been hospitalized with terminal cancer. The funky R&B singer born Clarence Reid was admitted to Hospice earlier this week. A statement has been released on his Facebook page:

Dear Blowfly and Clarence Reid fans. It is with a heavy heart that I must inform you that Clarence has Terminal Liver...
Posted by Blowfly on Tuesday, January 12, 2016


British band Sulk will release their new album, No Illusions, on April 1.

In a recent YouTube interview, President Obama was asked who would win a rap battle Drake or Kendrick Lamar. The Commander-in-Chief said without hesitation - King Kendrick.


David Bowie now has a constellation of stars named after him thanks to a Belgian radio station and star observatory. MIRA Public Observatory and Studio Brussels have named seven stars in the form of a lightning bolt to honor the Thin White Duke who passed away on Sunday.
Philippe Mollet from MIRA explained the inspiration for the constellation in a statement obtained by Pitchfork: "It was not easy to determine the appropriate stars. Studio Brussels asked us to give Bowie a unique place in the galaxy. Referring to his various albums, we chose seven stars - Sigma Librae, Spica, Alpha Virginis, Zeta Centauri, SAA 204 132, and the Beta Sigma Octantis Trianguli Australis - in the vicinity of Mars. The constellation is a copy of the iconic Bowie lightning and was recorded at the exact time of his death." 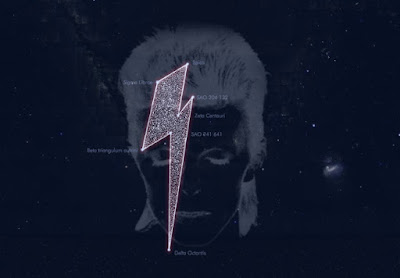