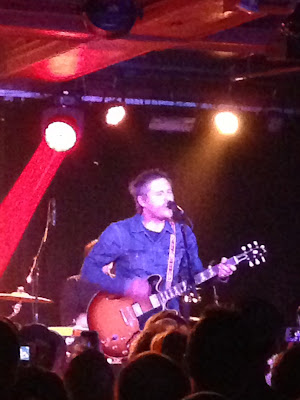 In the first solo outing to prep his new solo album, Painkillers, available in March, Gaslight Anthem singer Brian Fallon brought along familiar faces with him as he closed out leg one of the tour in New York City.

In a show that was supposed to be held in the 250-person capacity Studio at Webster Hall, the demand grew that they moved it upstairs into the Marlin Room to add in another 100 people. With Fallon was his backing band The Crowes, which many fans will recognize was his first side project from Gaslight -- The Horrible Crowes. Rebranded and redubbed, Fallon and his friends hit the small stage to the delight of an audience that packed in to see their favorite songwriter in a very small setting on a very cold night.

"You don't have to be here, so, I thank you. I mean that," Fallon told the crowd about halfway through his 90-minute set. With songs that were from Elsie, The Horrible Crowes' first album, new songs that made their Manhattan debut from Painkillers and a few covers of Molly and the Zombies and Springsteen, Fallon gave everyone a taste of what it is like inside his head and heart.

"I am just a guy in a jean jacket," he said to the crowd as he was involved in serious stage banter with his band mates. As people screamed out Gaslight Anthem song titles,  Fallon would fire back and say "don't be stupid" as the crowd ate it up. It wasn't his main band, it was him, fully exposed for the songwriter and artist that he is or just the guy in a jean jacket that plays guitar. However you want to look at it, his heart, mind, and soul, is in his music and exposed for the world to hear.
Posted by Salvatore Bono at 6:14 PM