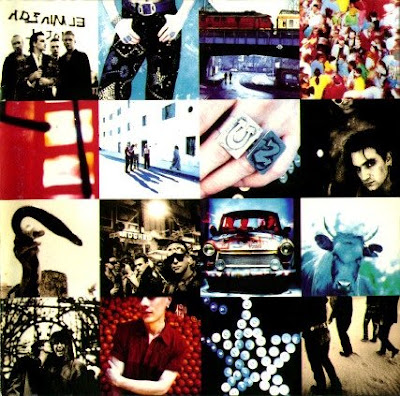 Nevermind , Ten, Screamadelica, Automatic for the People; these are albums that all define moments in the careers of the bands that made them and happened to all be released the same year – 1991. These were records that took these artists and skyrocketed them to worldwide success. These albums helped redefine certain genres, alter the sounds of these artists and showed a progression in mainstream rock music. One record by one artist in particular released in 1991 was not only a turning point it was also the record that held them together.

Released in the fall of 1991, U2’s Achtung Baby saw a re-imaging of the band’s look, a reconfiguration of the bands sound and took fans to places they did not expect. Inspired by Krautrock, German Techno, Euro disco, British Cold Wave, the Madchester scene, Achtung Baby was the culmination of everything happening in Europe at the end of the Cold War packaged together in one magnificent record. Recorded in Berlin during the fall of The Berlin Wall with producers Brian Eno and Daniel Lanois, U2 changed everything about themselves while they were on the verge of breaking up.

In the 1980’s no band shot to success faster and louder than the four men from Dublin, Ireland. U2 branded themselves with a post-punk sound and sang about politics, religion, innocence and changing the world, through their music they defined a decade and defined themselves as “serious musicians,” in fact, just watch their performance at Live Aid or any scene from their 1988 box-office bomb, Rattle and Hum and you will see how intense the band was on everything from their sound to inspirations to politics. From their stadium hits like “Pride (In the Name of Love),” “Sunday Bloody Sunday,” “Where the Streets Have No Name” to radio smashes like “I Still Haven’t Found What I am Looking For,” “With or Without You” and “Bad,” U2 had the world in the palm of their hand. Yet, with all their success, by the end of the 80’s, they were at each other’s throats.

The initial set-up of Achtung Baby was disastrous, after entering the studio and putting pressure on themselves and their new music, they looked at the reunified Germany for inspiration but as they pushed and pulled each other over the band’s sound. The band had decided that if they were not going to create a great record, they would break-up. Yet, one night that all changed as Edge picked up his guitar and began playing what would be the initial chords to one of their biggest hits, “One.” The song, which is about the band breaking up and then coming together, had culminated everything they had gone to Berlin for. With a new energy and muse, Achtung Baby was growing legs. Once they started having fun in the studio and taking parts of everything that motivated them, Bono took wrote his lyrics on a much more micro and intimate level, instead of writing about global issues and love, he wrote about break-ups (“So Cruel,” “Even Better than the Real Thing”), Berlin (“Zoo Station”), sex (“Mysterious Ways”) and even looked at himself as music’s failing messiah (“Trying to Thrown Your Arms Around the World,” “Acrobat”). Achtung Baby would not only be the record that reinvented U2 sonically, thanks to Bono’s words it also had fans understand them like never before.

It was the first time the band ditched their self-absorbed sound and image to allow listeners into their realm and heads. “If you dream, dream out loud and don’t let the bastards grind you down” Bono chants on “Acrobat,” it is one of the few times we hear Bono doubt himself or realize what he is doing may not work, but he is going to try his heart out, even if it means destroying everything around him.

While the music was rock and roll that once could dance to, the band’s look had changed. Instead of looking like British punks or American cowboys like they had in the past, they now looked like the Euro-trash that spilled out of after hours clubs. Bono himself poked fun at his rock star lifestyle by paying homage to rock icons of the past, taking Lou Reed’s shades, Elvis’s jacket and Jim Morrison’s leather pants; Bono would call himself “The Fly” during interviews and the band’s revolutionary ZOO TV tour, Bono would then adopt an alter-ego for his alto-ego later calling himself “MacPhisto” which was a glam-rock devil.

Thanks to the massive success and reception of Achtung Baby, U2 unleashed on the road for nearly two years with the ZOO TV tour, a stadium tour that was the first of it’s kind. The tour, which was a multimedia project that featured some of the world’s largest TV screens, Trabant cars hanging from the rafters and phone calls to The White House, ZOO TV was, at the time, the biggest tour to ever exist – the band would break their own record in 2011 as they wrapped their 360 Tour, which currently holds the position for the largest and most successful tour in history.

20 years since we all listened to the metamorphosis of U2, Achtung Baby still sounds as fresh and vibrant and different as it did back then. It not only became a landmark album for the band, but a landmark album of the 90’s and for music in general. It is an album that reinvented U2 after they already reinvented and evolved in the decade prior, it ushered them into a new era, the era of longevity. Achtung Baby would become the inspiration for bands like Coldplay, Snow Patrol, Nine Inch Nails, Glasvegas and countless others for years to come. Achtung Baby was born into a world of confusion both inside the band and outside into the world and now 20 years later, it has grown up in a world still confused to a band still very much confused with the amount of their success and still happens to be one of the greatest records ever made.

Posted by Salvatore Bono at 8:23 PM