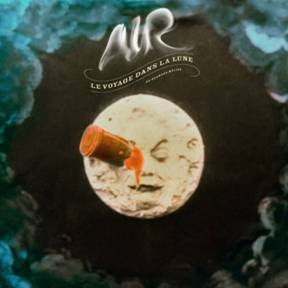 On February 7, French duo AIR will return with their new album of original material that is based off a very classic piece of cinema history. AIR will release, Le Voyage Dans La Lune (A Trip To The Moon), based on the classic silent film by revered French director Georges Méliès, which was made famous for a whole new genertaion when Smashing Pumpkins paid homage to it for "Tonight, Tonight" video. A Trip to the Moon was released in 1902, this legendary 14-minute film is widely considered one of the most important works in film history. Last year, AIR were approached to compose an original modern soundtrack, the film with the new soundtrack debuted at Cannes on May 11, 2011.
Inspired by their work on the film, AIR composed a full album based on the films story. Take a look at the cover above and the track listing below: