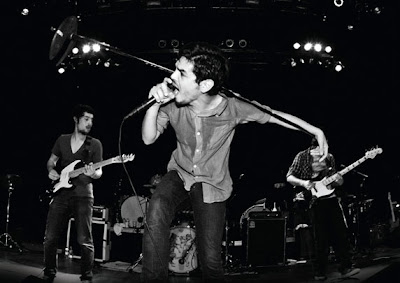 For a band to have a song called "New York City Moves to the Sound of Los Angeles," it is a bold accusation and title for a song but if you are band like Funeral Party, you are one of the few bands that can have a song titled that way and live up to it. For the east-LA five piece, Funeral Party are a rambunctious cornucopia of sound that are inspired by the music culture they have grown up on. They are part Red Hot Chili Peppers, part NWA, part Incubus, part Jane's Addiction, part Deftones but all their own. Funeral Party, who released their fantastic debut, The Golden Age of Nowhere earlier this year after much delay from labels, Funeral Party bring a raucous party and are only ready for more. A young band with much to say, Funeral Party are here to get you moving and bring you back to a time when rock and roll was dangerous. I spoke with singer Chad Elliot about the bands beginnings, build-ups and bold accusations about moving my city to the sound of his. Take a look at my interview with Chad below:

The name of the band is very morbid but the music you make is very upbeat, did you want to have a contrast like this when people heard your name then heard you music?

We didn’t really think about it like that, but we eventually noticed that contrast exists. The songs are energetic; they’re not really so upbeat once you’ve deconstructed the lyrics. We formed this band as a way of escaping our burned-out town, a place where death looms immanent, so Funeral Party was the perfect name.

The sound and style of this band is very much like LA, does the city hold a major influence on your music?

It does, but not necessarily directly. We’re from a suburb of Los Angeles, so we are outsiders in some ways. LA’s influence is filtered through that otherness.

Everyone in the band has grown up together and you have all known each other for years. Who started the conversation for all of you to form a band?

James Torres, our guitarist, but I had always wanted to be in a band. Music was banned from my life early on, due to my parents’ religious beliefs. My first exposure to rock music was seeing a Stooges video, so from that moment, I wanted to do music. The fact that is was contraband in my home only made me gravitate to it more.
Over here in New Jersey, Long Island and DC many bands started off playing basements. When you were starting out, you did a ton of gigs in backyards. Is this a popular thing for rising bands to do on West Coast?
It’s hot in California and there aren’t really basements, so backyards and warehouses, tow yards, abandoned houses – these are the logical DIY venues, but yes, backyard parties are sort of a rite of passage. Even Van Halen first caught traction in Southern California playing backyard parties. Even when bands weren’t popular, people were throwing backyard parties where DJs performed. There was a moment in 2005-2006 when bands and DJs were playing the same parties; it seemed to be unique to our neighborhood, but those parties were really great. It’s what we imagine NYC in 1980 to have been like, when Punk and Hip-Hop were part of the same art scene, except it was the Los Angeles, suburban incarnation, so I imagine it was more urgent because the cops were always on their way, and you had to make every moment count.
Like many American bands you have become massively popular in the UK before breaking big here in the US. Why is this?
It’s only speculation, but maybe because the music channels in UK still play music. It could be because people in UK still enjoy listening to the radio – but this is only a guess.
Your live shows are pretty incredible; you put 100% of yourselves into every gig. Does it get exhausting after a while?
Somehow it’s more exhausting not to do shows.
After many delays, your debut, “Golden Age of Nowhere” was finally released. What caused the delays? Do you feel any vindication now that it is out?
Who knows what caused the delays? Schedules change. Vindication? That’s a loaded term. Let’s please say, we are very excited that Golden Age of Knowhere has been released.
What was it like recording your debut?

Completely different than what what we’d always romanticized it to be, but a fulfilling experience just the same. We learned a lot, and we still have a lot more we want to try.
After the record was released, you were on Letterman and Kimmel, what were those experiences like?
Each were amazing experiences. Playing Letterman isn’t really something we expected to do when we formed the band; it just wasn’t part of our reality. We’re glad we had that opportunity. Kimmel was particularly exciting because all of our hometown came out of the woodwork and took the El Capitan Theatre (where the show is filmed) over. At one point, Jimmy asked if there was anyone in the audience who wasn’t from Whittier. If we’re fortunate enough to play Letterman again, maybe we’ll bring our hometown friends to NYC.

BURNING QUESTION: Does NYC move to the sound of LA?
It has every time we’ve played there.