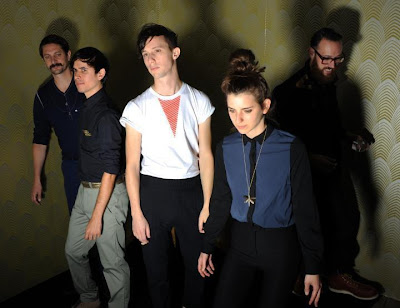 It felt like a scene from a horror movie, as I walked down these narrow stairs into the basement of Mercury Lounge, I felt like I was walking into a fallout shelter or a bunker and ready for something to pop out and attack at any moment. Yet, as I walked around the narrow hallways, past the boiler and massive pipes that are probably as old as New York City itself and was led into a tiny room where the members of Fanfarlo were hanging out, it was evident that this is not the glory that they were hoping in playing their first show in the big city in over two years. “It has been only two years but it feels like a decade,” singer Simon Balthazaar told me as we sat down to speak just before the band took the stage at the sold-out room upstairs. Behind Simon, members of the band were tuning their instruments, eating and some were getting massages outside the room in that narrow hallway from a fan that happened to be a Physical Therapist. The scene quickly went from a horror movie to a scene only Fellini could write.

Fanfarlo, were in town for a very small US tour to gain momentum for their forthcoming sophomore release, Rooms Filled with Light, which is due early next year. The band, which formed in London in 2006 by a group of musicians who knew next to nothing about each other but had the desire to make music and were all placed together in a kismet fashion. “Everyone in the band has seen the band before joining the band,” Simon told me, hinting at the bands revolving door of musicians before locking in the line-up we have today. Fanfarlo have been locked away all year making their new record, only played a gig in their hometown of London to debut new songs before heading to the US, “It is interesting seeing peoples reactions to the new songs, its something very validating. Like we are crossing over to a whole new world,” says Simon. The band, who have their own unique blend of folk inspired rock are looking to switch gears and sounds for album two.

“We have grown up…in a good way!” says Balthazaar. Simon then gave me some exclusive information on Rooms Filled with Light saying, “Going into the second record, we learned so much that we were just figuring out before. We got to know each other on and off stage and we brought that into the second record. We had a real need to try a different palate, using different instruments and the same instruments we were using in a different way.” For Rooms Filled with Light, Fanfarlo took inspiration from Modern Classical music, dub, Krautrock, Motown, Berlin-era Bowie and late 70’s / early 80’s pop. Their new influences is far cry from what fans heard on their 2009 debut, Reservoir. For Reservoir, Fanfarlo were starting off the folk inspired movement that has caught fire in London thanks to bands like Mumford and Sons and Dry the River. Yet Simon feels that style is old and done now, “that folk is over, we are not trying to be part of that. With changing our palate we are using much more electric and synth sounds.”

While Rooms Filled with Light, which is already finished, will see the light of day in early 2012, I had to ask why the delay on the release, Simon said with a half serious look on his face, “blame Christmas! No one buys good music around the holidays, so instead of being put out then, we will wait.” Simon already has his year with the band mapped out, “we are just going to tour, then tour some more. It is going to be a lot of time in a van. I love it and hate it, it is all highs and lows and sometime in there, there is summer in between.” As Simon will see the seasons all blend into each other, he should feel at ease, as Fanfarlo took the stage later that night, fans (including myself) reacted with such delight to the new material, Rooms Filled with Light is already looking to be one of 2012’s most anticipated albums. As our interview came to a close, Simon and I walked out into the narrow hallway as one of his bandmates was getting a massage, I motioned for him to get in line, he smiled and “oh you better believe I am.” We parted ways and as I climbed up those dreadful stairs to rejoin society, I realized it was all relevant for Fanfarlo to be here at this time, play the gritty tiny venue now, because it will be all posh, nicer places from here on out.
Posted by Salvatore Bono at 4:20 PM