Good news for fans of Brazilian Girls, the indie rockers have reunited and are no longer on hiatus. The band played a comeback show in Brooklyn earlier in the week.

Have the defunct Grit-rock band Viva Brother reformed as a boy band? Viva Brother, the British band who released their debut, Famous First Words, last year and were constantly having to change their name have apparently become a boy band based in Brooklyn. The group are calling themselves Lovelife and on their website, shows a picture of Viva singer Lee Newell. We are just as confused by this as you are. One year ago, we interviewed the band during their second named change when they were BROTHER (UK), take a look at that HERE.

Finally after nearly a year of build-up, Kanye West's G.O.O.D. Music compilation, Cruel Summer will finally arrive on August 7. The album will feature West along with 2Chainz, Frank Ocean, Jay Electronica, Big Sean and many more.


Following Fridays tragic stage collapse in Toronto, which left Radiohead's drum tech dead. Radiohead have now issued another statement concerning the future of them on the road via their website. Take a look below:


Hello everyone,
As you will probably have heard the roof over the stage collapsed at our show in Toronto killing crew member Scott Johnson and injuring three other crew members.  The collapse also destroyed the light show – this show was unique and will take many weeks to replace. The collapse also caused serious damage to our backline, some elements of which are decades old and therefore hard to replace.
Whilst we all are dealing with the grief and shock ensuing from this terrible accident there are also many practical considerations to deal with & consequently we have to try and reschedule the following shows...
We will make every effort to offer the fans the very best show possible under the circumstances – thanks for your understanding and support.
The dates effected are all of the bands Italian, German and Swiss dates.


On August 28, Electro and reggae worlds will collide as The Orb have teamed up with Lee "Scratch" Perry and will release The Observer in the Star House. Take a look at the cover below: 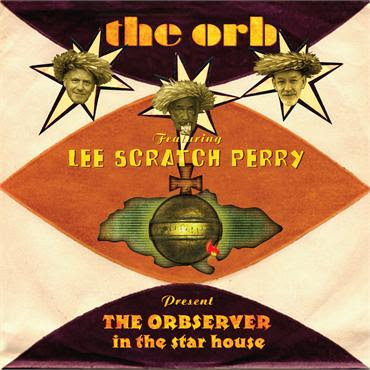 Posted by Salvatore Bono at 5:45 PM