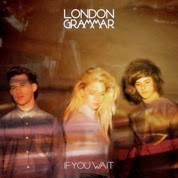 English universities must have something in the water that seems to produce great bands. Radiohead, Coldplay, Queen, Pulp, Pink Floyd, and so many more got their start at English institutions for higher learning, but another name to add to that list is London Grammar. The band formed in 2009 while attending University of Nottingham and craft a pop sound unlike anyone else. A trio that features guitars, keyboards and vocals, London Grammar find a way to craft so much by using so little. Singer Hannah Reid has instant 'It' girl written all over her and a vocal talent that will have the hairs on the back of every audience members neck stand up. The band, who just released their long awaited debut, If You Wait, where close to being nominated for the prestigious Mercury Prize but while the achievement may have come short, they are still turning heads and making a name for themselves as they hit the U.S. this month for their first North American tour.
Posted by Salvatore Bono at 5:26 PM