You can say seeing Pearl Jam in concert is like surfing. Sometimes it starts off bombastic and free falling like you are riding the waves at Sunset Beach in Hawaii. Other times it will feel like it is a gradual build and ebbs and flows through various cycles on your journey. The latter is how Pearl Jam performed at the second of their two sold-out shows in Brooklyn's Barclays Center. This weekend marked the first time the Seattle legends played the Brooklyn arena and they left their mark as only Pearl Jam could.

As the houselights dimmed at 8:30, Pearl Jam took the stage and opened with the somber tracks "Pendulum," "Wash," and "Nothingman." "Live from Brooklyn! It's Saturday night!," Eddie Vedder screamed before kicking into the title track off the bands new album, Lightning Bolt, then smashing right into the first single off the new LP, "Mind Your Manners." Now, things were beginning to get kicked up a notch and began to flex some serious musical muscle. Digging deep into the bands vast catalogue they still managed to keep the attention on the latest material. While the audience was left guessing which song would be next, Vedder and Co., did their best to entertain between songs as the band members were left switching and sifting their arsenal of instruments. Vedder would share stories from the night before, apparently many fist fights broke out in the crowd and the band thanked everyone for being on their best behavior and kept pushing the time limits to play longer. With a 20-song main set that lasted 90 minutes and included everything from "Even Flow," "Unthought Known," "Rats," "State of Love and Trust," and "Better Man," Pearl Jam were just getting started.

As the band exited the stage for a brief encore, members of the crew noticed a 12-year-old boy standing in the first few rows and invited him to stand on the side of the stage. It was a gesture that tugged at the heartstrings of everyone in crowd, "It is nice to see we span generations," Vedder told the audience before going into "Footsteps." It was the first encore where Pearl Jam slowed things down again and made the giant room feel like a small studio as they sat in fold-out chairs and broke out acoustic instruments for a series of slow tempo ballads and softer songs like "All Those Yesterdays," and "Future Days." That all changed when the opening chords to "Do the Evolution" kicked in and all of Barclays came alive. With Vedder running into the general admission section and guitarists Mike McCready and Stone Gossard running around on stage, the whole arena was mesmerized by the chaos and sheer excitement they were bringing. Going straight into "Go" and "Porch," they ended on a fierce note before heading off stage again.

While many began exiting the arena thinking the show was officially over, Pearl Jam arrived back on stage for a second and final encore that featured fan favorites "Alive,""Black," and their monstrous cover of Neil Young's "Rocking in the Free World." With Vedder swinging from lighting fixtures that dangled above the stage and McCready running into the GA section, it was pushing the three hour time limit but as long as they kept playing, no one was telling them to stop. As the houselights kicked on, the band played right through going into their final song, "Yellow Ledbetter." After three hours of riding the wave that is a Pearl Jam live show, it was time to head back to shore and head home. 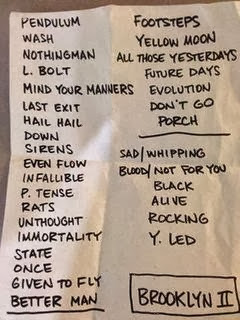