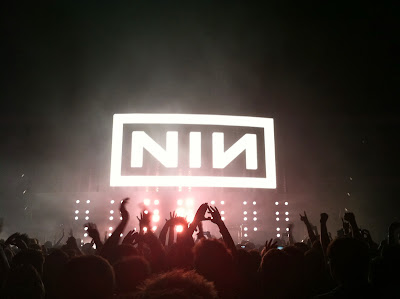 In 2009, Trent Reznor waved goodbye to Nine Inch Nails as a touring band. Reznor vowed that NIN would still continue to make music, however, touring would halt. After doing a series of special farewell gigs in New York City, Toronto, Chicago, and L.A., Reznor began a new chapter in his life and career. He got married, started a family, won an Oscar for his score for The Social Network and scored The Girl with the Dragon Tattoo. Reznor, along with his wife and co-Oscar winning composer Atticus Ross and longtime NIN collaborator Rob Sheridan formed How to Destroy Angels, that band is set to released their debut, Welcome Oblivion, this past year. So, in February, when Reznor said NIN were coming back, fans of the band thought the leader was just going to release a new album, however, what happened four years ago seemed to be in the past, Reznor wanted to hit the road.

After the big announcements that a new album, Hesitation Marks, and tour were to follow, Reznor assembled an all-star cast of a line-up that included longtime NIN members Alesandro Cortini, Robin Finck, Ilan Rubin, as well as Who bassist Pino Palladino, and Telfon Tel Aviv's Josh Eustis. While the band blew away the festival circuit at high profile festivals like Japan's Fuji Rock Festival, Lollapalooza, and Made In America, it was time for the new Nine Inch Nails to sink their teeth in America's arenas. Dubbed "Tension 2013" the tour landed at Brooklyn's Barclays Center on Monday night and Nine Inch Nails made their Brooklyn debut and live return to the New York City area. Opening with "Copy of A," then going right into "1,000,000," "Terrible Lie," and "March of the Pigs," tension is exactly what Nine Inch Nails brought to Brooklyn. "Lets Go Pigs!" Reznor screamed as the opening percussion beats were hit as the song began, it was the first thing he said to the crowd after 20 minutes of playing that was not a lyric. Playing on and around a stage filled with enough strobe lights to give everyone an epileptic seizure, NIN were back and better than ever. As giant screens, lighting grids, altered for each song and surrounded the band, it was as if there was enough special effects that James Cameron would envy and would want to use for one of his blockbuster films. Utilizing the latest in technology, the band had a series of screens that projected 3-D images without the need for the goofy glasses. It was a sight to be seen and the band was something to be heard, even backed by two back-up singers, it added a different dimension to the songs. Reznor seemed happy to be back and the band sounded tighter, louder, and more aggressive than ever before, like the Hesitation Marks single says they "Came Back Haunted."

With a majority of the 26 song playlist being secondary singles like "Survivalism," "Piggy," "Wish," "The Day the World Went Away," it was clear that they setlist was not designed for the fairweather fan. These are gigs for the die hards, the ones that waited all this time hoping for them to be back on the road. With epic performances of "Satellite," "Somewhat Damaged," "The Hand That Feeds," "Head Like A Hole," Reznor was running his band like a drill Sargent on militant time, there was no breaks between songs, there was hardly any time to get a drink and any talking going on between songs as the musicians tuned or wiped the massive sweat from their brow, it was go time with no time to waste. The only time Reznor addressed the crowd came before "While I'm Still Here," saying, "Thank you so much for sticking with us. Thank you so much for coming out and believing in us, it means the world to us. Now, before we get too positive, let's go." Closing with "Hurt" at points you could hear a pin drop in the giant arena as fans held onto every word as the brutal ballad of addiction rang through the crowd. With heavy reverb and feedback coming in at the end of the song accompanied by blinding lights it was as if the band vanished into thin air. They became an enigma and like that the night was over, but what a night it was. Welcome back Nine Inch Nails.

Nine Inch Nails 10/14/13 Barclays Center Playlist
Copy of A
1,000,000
Terrible Lie
March of the Pigs
Piggy
All Time Low
Disappointed
Came Back Haunted
Find My Way
The Frail
The Wretched
Satellite
In Two
Survivalism
Running
A Warm Place
Somewhat Damaged
Wish
Burn
The Hand That Feeds
Head Like a Hole
Encore:
The Day the World Went Away
Even Deeper
While I'm Still Here
Black Noise
Hurt
Posted by Salvatore Bono at 6:17 PM