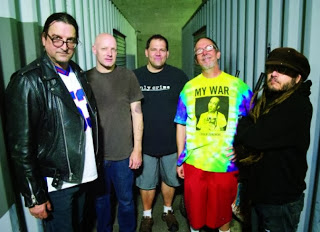 This year saw the emergence of two versions of the iconic Hermosa Beach, California, hardcore icons Black Flag. One band under the original name Black Flag features original guitarist Greg Ginn and vocalist Ron Reyes, as well as Dave Klein from the 2003 version of Black Flag on bass. Another one of the Black Flag offshoots was FLAG which features OG Black Flag vocalist Keith Morris, original bassist Chuck Dukowski, former Black Flag guitarist Dez Cadena, former Black Flag drummer Bill Stevenson and ALL / Descendants guitarist Stephen Egerton. While both groups are duking it out in the press to showcase who is more Black Flag-esque, we spoke to Dukowski about FLAG and the current formation and tells us that his band is as close to a Black Flag reunion as it is going to get. Take a look at our interview with Chuck Dukowski below:

After all of these years, what is it like to go back and revisit the old Black Flag material?
It is amazing to play the music of Black Flag. We all poured ourselves into its creation and it still resonates with meaning when I play it. The music is as much a part of us as we are of it.

After all these years apart, why a reunion / tour?

It kinda snuck up on us. A few years ago Keith and I jammed some early Black Flag songs with the band NO AGE at a free outdoor show at MacArthur Park in LA. Then in December 2011 we played some songs with Bill and Stephen at the Goldenvoice Productions 30th anniversary show. Goldenvoice was the only concert promoter that was brave enough to put on Black Flag shows back in the day. We used to have so much violence and trouble; it was cool to do something special for them. We had such a great time the music just took us over. We all decided that when the chance came we would do it some more. So we got ripping on a full set and here we are.

Who came up with the idea to bring FLAG together and go about doing the Black Flag tunes?

It felt like a natural thing to do. We all have other bands also but we share a love for the music that we wrote and performed in the past. It’s satisfying to play that music well and see the audience go crazy. It’s joyful.

The revolving door of singers that were in Black Flag and bringing together Keith and Dez, has their been talks to try and coax Henry Rollins out of retirement for a gig?

We all love Henry, what a great performer. I would be fun to have him play with us. He’s very busy but we will see…

With Dez and Keith sharing vocal duties, has the material just been focused on the early work?

We get into everything, not just the early stuff. We tried to play most of the best songs. There is a large dollop of the material from Damaged and we are doing a couple of songs off of the MY WAR album.  We do a tune that was recorded for the ‘83 demos but never released.

Has there been talk of a studio album of brand new material?

Virtually every interviewer asks that question. You never know but but we are not planning on an album of new material. The Descendents, OFF, Dez Cadena and The CD6 are all working on new recordings.

Stephen Egerton is a brilliant punk guitarist, but the only member of the band who was not in Black Flag prior. How did he come on board?

Stephen plays in The Descendents with Bill. He jammed with us at the Goldenvoice 30th show and it clicked. He is brilliant! I really like Stephen's playing and I also really like him as a person. Stephen has really been blowing my mind lately with his epic shred.

The fact that two Black Flag spinoff bands are around and the lawsuit brought on Greg Ginn, which band has more ownership to the true roots of the band?

I think we do. We have four members of Black Flag whose soul, sweat and effort made the sound and the reputation real. I went to jail for Black Flag. I slept on floors. I lived in a car. I starved and worked and had fun. There was no guarantee of success. It’s hard for people to understand what it took to bring that raw energy to people. Even now some people don’t respect what it takes to get up there and share that electricity with an audience. The proof is in the jammz.

The legacy of Black Flag has outlasted the band(s), why do you think this is?

We put ourselves on the line and made a statement of truth and dark beauty. That music and those ideas and feelings are not a passing thing. They speak to eternal truths and human dilemma.

The band members are not in your late teens, early 20’s any longer. You are now established men within the punk scene, have children, families, homes, etc. Does the music still mean the same to you now as it did decades ago?

Yes. It was not a phase. My kids and I talk about it all the time. Heavy feelings, knowing what is right and wrong, being true to your real self, these are not things that go away with age. They are not a passing phase. If anything aging has made me more radical. Family has made me care more. I am lucky that I play music in The CD6 with my family and that each of my four children is more of a radical artist and thinker then the next. I wrote a lyric for the Black Flag song Spray Paint ‘My life is their disease” In my house with my family we feel this music and more. We are adding some thinkers, some artists and some truth tellers to this planet. Your true self, your true feelings can either empower you if you embrace them or dog you down if you ignore them. I choose to embrace and rise.

What has been the best thing about being in FLAG thus far?

The audience. The response from the fans has been so epic positive and empowering.

When Black Flag gigged all those years ago it was in basements, independent clubs, DIY venues, Knights of Columbus halls, schools, and so many non-commercial joints. Now, FLAG has been playing festivals, famous venues, corporate run places, does this change the ethos of what the message in the early days was all about?

I booked all of the Black Flag tours and shows. We played everywhere and anywhere including many of the same places FLAG is playing now. I really wanted to play a free show in MacArthur Park back in the 80s but didn't get to do it until 2011 with NO FLAG (Keith and I with No Age). The ethos is unchanged for me.

Where does FLAG go from here?