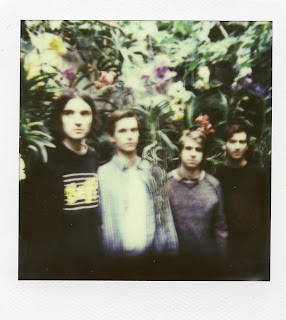 It has been five years since we first introduced you to England's Tripwires, a sci-fi rock band that has all the energy and imagination to fill a stadium and take hold of the festival world. Now, since that time, we have grown as a site and they have grown as a band and this past summer, finally released their long await debut album, Spacehopper. We spoke to singer Rhys Edwards about how the band has changed over the years since we first learned about them, making their debut and what the future holds in store. Take a look at our interview with Edwards below:

When we first covered this band, we were still using Myspace and that is actually how we got in touch, over 5 years ago! How times have changed, how has social networking had an impact on your bands career and music?

It's certainly made things a lot easier with announcing tour dates and things. We're getting more used to facebook and twitter now, MySpace was horrible to use so quite glad we've sacked that off now. We seem to do most of our twitter updates whilst partying so they tend to be a little weird. There may be occasional nudity.

What was it like to finally record your debut?

We recorded the record in Brooklyn with Nicolas Vernhes who we wanted to work with for quite a while so when we finally got the green light it was a great feeling. It was a very surreal experience recording a record in such an alien environment but it was of course very exciting for us.

What does the title of the album “Spacehopper” signify?

A lot of the record is about growing up in Reading so Spacehopper was this kind of snapshot of youth. When we were recording we joked that it was starting to sound like a spaceship landing on Jupiter so the name stuck. It's also a pretty funny word.

Hailing from Reading, England, a town more famous for its annual summer music festival than anything else, how has that city shaped and influenced you as musicians and as people?

To be honest the festival is a very detached part of Reading; it comes and then goes. Reading bands don't get any sort of showcase there really.

Growing up and writing songs in Reading is definitely different to, say, London, as we were never really aware of much of a scene. As we grew up though we discovered that Reading did in fact have a rich heritage of great bands like Slowdive, for example.

Having said that, there are some very good Reading bands around today, the town just lacks a decent small venue for touring bands, it tends to be overshadowed by London and Oxford.

From the first time we heard your music in 2008 to now, you have evolved so much. Because of this evolution, did it delay the release of any music?

We went to school together and grew up together, we started off playing Slipknot and Nirvana covers at lunch time and after school in the music rooms. Where we are now is the result of years of being exposed to many different artists, and refining our writing. Of course we've written some horrible stuff along the way, too. The main thing to delay the release of music, as with many bands, is politics; but our songwriting has only got better, so it's a good thing we didn't release an album a year ago. You need to wait until you know who you are.

What is it like to be in Tripwires now?

We have been very busy with artwork for the record (which we did ourselves) photography and recording a video. We are looking forward to our first headline tour this month.

Where does this band go from here?

I guess that's not really for us to speculate on. The main thing is we have an album we are very proud of, we are willing to work hard touring it, and we enjoy doing so. We have started writing again since recording Spacehopper, so there is refining and demoing to come. As long as we are touring the record and people are turning up to gigs, we'll be happy.

How would you describe your music to someone who has never heard of you before?

Like a mixture of everything we've ever listened to and liked. Like a hairdryer to the face one moment and sparsity the next.

One of the fun and funny facts about the band is that you once covered a Slipknot song, given that that is the furthest thing from your style now, would you still find a way to bring it in your live sets just for fun?

We covered more than one! and no, that would be highly unlikely. We were about 14 at the time. We do however enjoy playing a cover, usually the closing song. More like Neil Young or Daniel Johnston nowadays though.

Being failry self sufficient, each of us being good at something other than the music, be it recording, design, photography or ideas for videos etc. Having a world and an identity.
Posted by Salvatore Bono at 1:02 PM