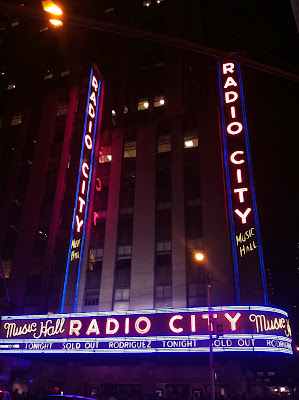 If someone a year ago were to have told Rodriguez that in a years time he would sell out Radio City Music Hall he probably would have said they were crazy. Last summer, he sold-out the 600 person Highline Ballroom and in years prior was struggling to sell out places even smaller like Bowery Ballroom and Joe's Pub. Now, thanks to the release of the Oscar winning 2012 documentary about him, Searching For Sugar Man, Rodriguez, now at 71 is achieving the success he should have had his whole life.

Just after 9p.m., Rodriguez was escorted on stage by his daughter, who happens to be his manager, and personnel from his crew and was handed a pair of sunglasses, a top hat, and his guitar and he began to play. Backed by a band a generation younger than him, Rodriguez seemed comfortable, alive, and perfectly in tune to what was happening and what was around him. It sounded as if his singing has not aged one bit and sounded as pristine as he does on recordings from over 40 years ago. The modest Detroit folk musician was poised to be the next Bob Dylan in the early 70's but thanks to poor album sales and terrible management, his musical career fell by the wayside. However, in a remote part of the world, Apartheid-era South Africa, he was a God, he was bigger than Dylan, bigger than Johnny Cash, and bigger than Elvis, yet, no one there had any information on him. It wouldn't be until the late 90's, thanks to the internet boom when two South African fans discovered who he was and that he still played, but were surprised to learn he was unknown in America. Rodriguez's story is as touching as it is heartbreaking, profound and it is unbelievable and thanks to technology and eager South African's who documented their tracking of searching for Rodriguez in Searching For Sugar Man, his career, in the twilight of his life is bigger than ever. "So, I want to share with you all that I received the French Legion of Honor Award," Rodriguez told the packed Radio City, to thunderous applause, he then joked, "I want you all to know that I want to be a normal Legion." With that statement, it summed up Rodriguez as a man perfectly, he is a humble, modest, talented person who doesn't take anything for granted. In a world filled with celebrity driven ego, it is as if one of us, a regular joe, has achieved star status and could care less, he simply wants to perform in front of people.

Playing mainly the songs heard in the documentary, "Sugar Man," "I Wonder," "Street Boy," "The Establishment Blues," he also added in deeper cuts from his two albums, 1970's Cold Fact and 1972's Coming From Reality like "Climb Up In My Music," "You'd Like To Admit It." While rumors that a new album will arrive in the future, we are still all discovering his music as if it was brand new. During his 75-minute set, he even took time to give a shout out to South Africa, "Anyone from South Africa here?" With many in attendance, it is South Africa who Rodriguez belonged to first and how he is a global sensation. We must all thank South Africa for finding a piece of buried American treasure that was hidden in the blue collar parts of Detroit. Now, it raises the question, how many more like Rodriguez are out there that we need to search for?
Posted by Salvatore Bono at 8:52 PM