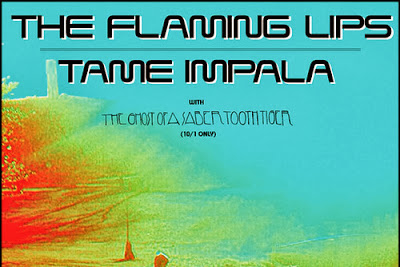 It was a co-headlining bill that may seem obtuse at first, rising Australian buzz band, Tame Impala on the same level as psychedelic indie legends, The Flaming Lips, but the match-up worked just right. It was a night of music that dazzled the ears, stunned the eyes, and left all senses senseless by the time it was over. On a sonic assault on all audience members in attendance to Manhattan's Terminal 5, the co-headlining venture of The Flaming Lips and Tame Impala may be one of the best tours this season.

The night opened with music royalty as Sean Lennon's band, The Ghost Of A Saber Tooth Tiger supported the first of this bills two sold-out nights at the venue. While Lennon the latest incarnation of Lennon's new band sounded like they have been playing together for years were only on their fourth gig together. The band's sound is a cross between classic rock, prog, and early psychedelica, which by the time they covered a Syd Barret song, it fit in perfectly. While the band had songs that were hit-or-miss, it was fascinating watching Lennon play, with his long hair and cowboy hat, he looked like the spitting image of his late father during his "Strawberry Fields"-era look.

Around 9 p.m., it was time for Tame Impala to take the stage. While the band only have two albums to their name, it was last years release, Lonerism that made them critical darlings around the world and showcased their chops that could allow for them to share a bill with The Lips. Playing in front of a white screen that projected trippy and groovy images that were in synch to the beat the band were creating, it was a showcase that would mentally prepare the crowd for what was to come from the other band on the bill. The bands sound was so solid and tight that it is no wonder they have become critical favorites but while singer Kevin Parker's vocals seemed to be lost in the mix of the music his band was creating, it was the only downside to an impressive set that featured jam sessions, extended drum and guitar solos and thumping bass lines that had you checking your chest to make sure you were not going into cardiac arrest.

After Tame Impala's 75-minute set, there was a near 45-minute break between sets so that the stage crew for The Flaming Lips could set up for the bands mind blowing and often times brain melting stage show.  While the crew members were dressed in lab coats, it added to the affect that The Flaming Lips have conveyed with their live shows over the years, which is, everyone is apart of the show, including the audience. Taking the stage just minutes shy of 11 p.m., singer Wayne Coyne, who was dressed as a medieval knight crossed with a spaceman (it simply is the only way to describe what the costume looked like), took to his microphone stand, which was made of giant metal balls split it half that looked like a crater from outer space. While the crowd went nuts to see them finally on stage and ready to perform, an unknown person told the fictional tale of The Flaming Lips in Spanish to the crowd. While many were left puzzled, the band looked like it was just another day in the office and it was time for the weirdness to start. Opening with "Look...The Sun Is Rising" off this years release, The Terror, the stage show was immediately unlike anything I have ever witnessed before. With enough lights that could light up an small village and a giant projector screen that had rope lights connected to it that would wrap around the set to all ascend to Coyne's mic perch, it was a production that after one song in hand enough power and vibrancy that it didn't matter anyone had to be at work in the next few hours, we all wanted this to go all night. As Coyne threw glitter into the first front rows and massive amounts of confetti and smoke from dry-ice machines filled the venue, it looked like a New Year's Eve party rather than a concert, but this is The Flaming Lips, if they didn't make a mess and didn't make every part of your body tingle in some strange way, there would be no point in seeing them. While most of the setlist featured songs off The Terror and 2009's Embryonic, it was a short but sweet 11 song set that sent everyone to a galaxy far, far away. While the show may take away attention from what the band are doing musically, it does however, work seamlessly into the production and glitz. It has to be said that The Flaming Lips as musicians are very talented men who have some of the most creative minds in music. With a stage show and amount of perfect production as The Flaming Lips have, it is a wonder why they are not on Broadway every single night, if this traveling sci-fi circus would settle down, it would be something you would want to witness as much as you could.
Posted by Salvatore Bono at 6:10 PM