Monique Powell On Save Ferris' Rebirth: 'All I Wanted Was To Bring The Show And The Music Back To The Fans' 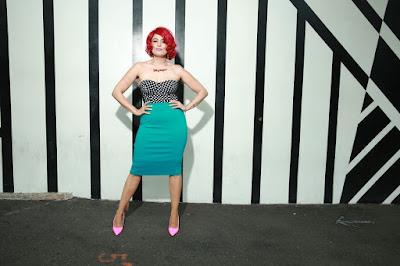 In the mid-90s, the ska scene sort of exploded from nowhere. In New York City and Long Island, bands like Spider Nick and the Maddogs, The Scofflaws, The Slackers were invading the clubs in the area. Boston had the Mighty Mighty Bosstones, of course, but Southern California had the biggest emergence of ska revivalists. Artists like No Doubt, Reel Big Fish, Buck-O-Nine, Voodoo Glow Skulls were all in full force. There was also the ska punk band Save Ferris, who fronted by the charismatic Monique Powell brought something new to the table -- vocal talent and some of the most personal and catchy tunes anyone has ever heard.

Save Ferris hit the mainstream thanks to their cover of Dexy's Midnight Runners' classic, "Come on Eileen," and with two albums and sold-out shows everywhere, by the end of the decade they called it quits. They were on-again and off-again in the early Millennium and now for the first time in almost 20 years, the band are back with a new EP called Checkered Past.

We spoke to the brilliant frontwman who was determined to breath life against into the band.

After so many years away, what caused Save Ferris to reunite?

Well, in 2012 I received a diagnosis in which I would have to have emergency neck surgery. The damage from the degeneration in my neck was so severe I was losing my ability to walk. That being said, the surgery is typically performed through the front of the neck, and with the extent of the damage, I would never be able to sing again if they were to do that. I had three doctors ask me to choose, they said “do you want to walk or do you want to sing?”. First I had a virtual nervous breakdown, then I decided I was going to find a doctor just crazy enough to go through he back of my neck and if I survived the surgery with my voice and my legs in tact, I was going to do bring SF back! After months of physical therapy in which I had to learn literally how to hold my head up again, I was ready…..

The music world has changed so much since you have been gone, what was it like coming back into it all?

Well, social media makes things so much easier and harder at the same time. Its made it much easier to have control over my business and to operate functionally even when there was no money to be had. Radio’s also different. Fewer people listen to radio anymore.

What were you up to in the years the band were inactive?

I got into some successful business ventures and did a lot of studio singing.

Your new EP, Checkered Past, picks up where you left off but also gives a fresh take on a new chapter in Save Ferris. What were the influences that helped craft the EP?

The first Save Ferris EP, my favorite, was probably my biggest influence. Everything was so new then, and after all these years I had the same feeling going in to write and record this album. I wanted each song to represent a different facet of SF, with one song as an introduction to the future SF sound.

Is a full length record in the works?

There was a lot of legal and personal issues among the band when you reactivated in 2013. Now that the dust has settled and it has been resolved, what is it like to be in control of your art after the fight to get your assets?

Fuckin' awesome. It was worth every single second of it. All I wanted was to bring the show and the music back to the fans, and, well, I get to do that now. Even more, I get to help create an environment for my band and the fans that is filled with camaraderie and friendship, compassion and encouragement. I built a new foundation from the ground on up….of course it’s not perfect, but it’s beautiful. And it’s mine.

Ska took off in such a big way in the late 90s, do you ever see it coming back or has that time come and gone?

I always see it coming back! Ska-history has repeated itself enough over the last 50 or so years, it makes it clear to me that it’s not going anywhere.

You used PledgeMusic, the fan funded site, to help finance the making of the new EP and you hit your goal in a matter of days. What was it like to know that the fans still want new material from you?

It was a relief. It completely validated what I had prayed for….people still knew who we were.

Now that you are back, what is it like to have the fans respond, reach out, and still here for you after 18 years away?

Well, technically, I was only gone for 10 years but who’s counting?

I want to take it back to 1999 for a second, the final song on "Modified" -- "Let Me In" -- I still say is one of the most underrated and beautiful songs of the 90s. I need to ask, what was the inspiration of that track?

I would have to agree with you. Although I did not write that song, the person that wrote it took the words out of my heart that I just didn’t have the strength to express. At the time, I was going through one of the toughest experiences of my life…..but that song was the best thing to come out of it. For that I will always be grateful. I will always love that song and the person that created it.

Take a listen to the band's new single, "New Sound" featuring Neville Staple of The Specials!