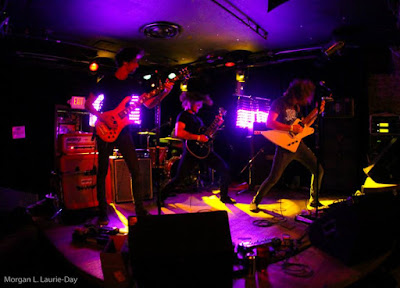 Just last month, our musical world was flipped upside down after we heard of Boston prog rockers Astronoid. We tapped the band as our December Rising Artist and described them as the soundtrack of a meteor shower if you were on board an asteroid falling into Earth. It is not only vicious and well thought out music, their is a quality of intricate genres that they tie together and made one of the most surprising records of last year with their debut, Air. Now, we speak to member Brett Boland about the band's beginnings, influences and work.

Take a look at our interview with Astronoid, below:

How has Boston influenced your work?

The Boston area has always had a great music scene and is always giving birth to bands that really have a sound of their own. We also have a great group of friends in other bands that are really talented and great people. We were lucky to have run into all of them and can attribute that to Boston. We aren't technically from Boston, but it’s certainly our home city.

Given the massive scale of sound you guys produce, who are some of your biggest influences?

We grab influence from so many places. Bands like Enslaved, Ihsahn, Devin Townsend fuel the metal side, while other bands like Mew, M83, HEALTH, and Coheed and Cambria fuel the other side of it. We are shameless when it comes to our influences. There's no such thing as a guilty pleasure. We love what we love because we find something special in it.

Given your name and the from the band really does sound like it comes from another planet, how fascinated with outer space are you?

The band name came from a video game conversation, which stemmed from my love of Sci-Fi. 2001: A Space Odyssey is my favorite movie of all time. I think its the concepts of science fiction that I love more than the actual Space aspects of it. I love the questions of morality and sociology that the twilight zone alludes to, and these concepts make their way into our music. I do a lot of reading into space though, like weird theories about the moon and stuff. I do find it all really fascinating.

This is a great question. I have no idea. We did not expect the album to have the impact that it had. We knew we had something different and something that we really believed in. 2017 has a lot in store for us. We hired our dream booking agent, we have amazing things happening in the background. We want to get out and play in front of as many people as possible. Since June we have been practicing and re-imagining our live show. Relearning the songs and orchestrating them better for playing live. We have only played the songs on “Air” twice and we are about to play the album in its entirety for the first time. I’m really excited to see what happens next.

The band has gotten much critical acclaim, how do you respond to it?

It's really nice seeing that others wanted the same thing we did. We made the album we were itching to hear, and blended the genres we love. I love that people are loving the record. It means so much to me when people reach out to us about how it has enriched their lives in some way, whether it just made their day or it's helping them through a tough time.

Astronoid came from the ashes of other bands, what makes this combination of artists work so well?

Dan, Casey, and I were in Hetfield & Hetfield which was pretty much the polar opposite of this band. This forced me to try to write something a bit simpler which lead to Astronoid. Matt was in Vattnet Viskar, and Mike was in Feels Like Home. We all bring different things to the table that help the creative process. We have been friends for years, and Casey and I have been in bands together since 6th grade. I couldn't be happier with the group we put together.

Working on “Air” was a lot of fun. We weren't really sure what we were trying to do. There were many different directions the songs were taking, but some of them just didn't feel right. We had some in a more prog rock direction, and some more in a metal direction. Tin Foil Hats was the first song that was written for the album, and that seemed to be the cornerstone of what we wanted the album to sound like. It took 3 years to finish the album. We took our time and made sure that everything was where it needed to be. There were parts that were added to some of the songs during the mixing stage that made them what they are. We recorded the album in a very “non conventional” fashion too. The drums were recorded in Dan’s parents livingroom/Kitchen in 3 days when they were away on vacation. The guitars were done in my garage and Re-amped....also in my garage, which was the same place we did vocals and everything else. Dan and I have both worked in conventional studios, so it was fun to see what we could do with what we had. If we had recorded this in a studio, it wouldn't have been the same.

Has work for your second record already begun?

I am always writing new music. Some of it will probably end up on the new record, but we have not officially started on the next record. Dan has sent me a couple songs too. While we were working on “Air” we stopped playing live because we didn’t want to play any of the new songs until they were done. Now it’s time to play these songs live. I assume once we start working on the new album we will go about it in the same way we did for “Air”. It’s going to be a process of finding out what this next album is going to sound like, and what limits we want to push. Heavier? Lighter? Both?! I’m excited and nervous thinking about it.

As the landscape of music changes by the day, what advice do you have for a band starting out?

I think the most important thing about playing music is to play what is true to yourself. Don’t play what's popular, or what your friends like, or what anyone else thinks you should be playing. People can see through something that's forced or false. Also, practice to a metronome and backup your hard drive's.

What are the biggest hopes of Astronoid?

The biggest hope we have is to continue playing the music we love with our friends. I’m really looking forward to the tour adventures we will have and the bands we will get to play with. It’s crazy to think that something that started in my dorm room has grown so immensely and we all just want to keep going and see what happens. We are very fortunate and really looking forward to kicking some ass on tour.

Posted by Salvatore Bono at 2:15 PM