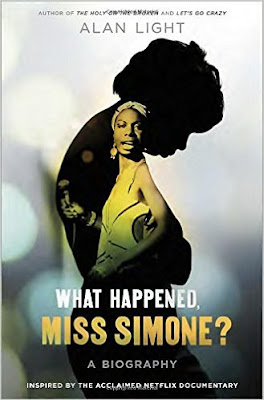 Inspired by the acclaimed 2015 Netflix documentary of the same name, What Happened, Miss Simone? tells the in depth story to one of music's most prolific, confident, tormented voices -- Nina Simone. The book by music journalist Alan Light, released last year, gives the inside story of Simone's career, social justice cries, as well as going inside the mind of a tortured artist.

Light gets deep by going through a vast amount of raw footage interviews, personal accounts, and research to discuss her rise to stardom and self imposed exile to Africa and then later France. While the book may be a companion piece to the film, it showcases just how tragically beautiful the story of Nina Simone was in a whole new light.
Posted by Salvatore Bono at 5:26 PM