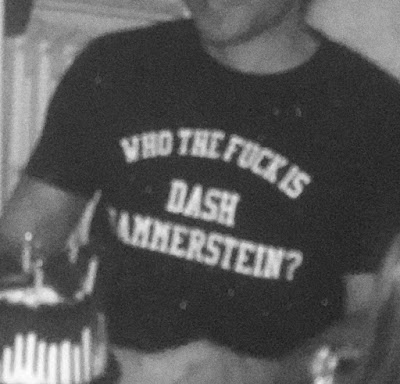 Brooklyn Singer / Songwriter Dashel Hammerstein released his latest record, Grapefruit Rhythm, in the fall and following it's release, our own Raf Richardson-Carillo spoke to the musician about the record, his influences and crafting the record.

Take a look at the interview and then hear his new song "Audition," below.


1) I texted you after listening to “Grapefruit Rhythm” saying it sounded like Elton John, Monty Python and the Incredible String Band got together one weekend -- I don't want to ask you who you think your influences are, but were you listening to (or reading, or watching) anything at the time of recording that you think might have bled through and influenced the album?

There are definitely a lot of direct influences on this album - Ada is straight out of the book by the same name, the lyrical theme of “Black Phillip's Boy” is straight from the movie The Witch, “Quantum Entanglement” is a physical phenomenon I learned about, etc. I think it's safe to say at this point that “Violence Now” is just about 2016. I find that when I go into the studio to write a song that sounds like a horror film or a book or like a physics lesson, I'm much more successful than when I go in trying to write a song like John Lennon.

That said, my three biggest influences on this album were Elton John, Monty Python and the Incredible String Band.

2) Hardy har har. I think that's healthy, not trying to sound like Lennon. Did you ever catch yourself emulating admired predecessors too closely?

Of course! Usually those are the worst songs of all. I'll definitely take pieces though. For example, the song 'Please' - that's me trying to write a song with a 'Panic in Detroit' feel. But when Bowie was writing that he was almost undoubtedly trying to make a song with a Bo Diddley feel. Same with 'Ada.' Most people hear the first few seconds and think 'Oh Elton John!' The truth is I don't really listen to Elton (though I recognize him as a great songwriter), I just wanted to use that rhythm because it's fucking solid. Plus he got it from Donny Hathaway's cover of Jealous Guy. It's all a conversation - I'm just adding my own voice to it.

3) "Violence Now" reminds me of The Velvet Underground's "Who Loves the Sun" in the sense that there's a dissonance between the sound and the content. You've got this jaunty rhythm and melody paired with somewhat grim lyrics, which is an effective approach for a piece of art with some social commentary in it. Was this a conscious thing or just what happened?

Actually this was a conscious thing. I don't want want to say that song is a joke but it kind of is. That bright California sunset girl-group sound underneath those dark lyrics - it's funny! It doesn't make any sense - you think twice. Not to sound like some kind of academic but I wanted to highlight the absurdity of violence in our culture. On one hand, we detest it and petition for it to end. On the other, we can't get enough of it. Depends on where you are and what you're doing I guess. So goes the song - on one hand, its a very nice and happy song. On the other hand, it's fucking brutal. If you have some element of discordance between the message and the aesthetic - songs, paintings, film, whatever - then it's going to be interesting.

4) Can you identify a unifying preoccupation or idea that the album deals with as a whole? If so, was that always in mind or did it develop naturally as you worked?

No, but this album wasn't really written that way. It was sort of borne of necessity. About a year ago, I had a great band, playing a lot of shows and this music thing was feeling good. I met with a manager who told me to take all my music off the internet. He managed all these great bands I admired so I did what he said. The relationship didn't work out but I still trusted him on the
internet music question. Then sometime in the fall, I get a great placement on High Maintenance on HBO and I think, shit I need to have something out there! So I started developing a few of my favorite old tunes, had them mastered and called it an album. It's nice because it was written over a long time and I think each tune stands alone nicely. But for the next one, I'd like to make an album that's more focused.
I guess if I have to pick a unifying preoccupation with all my music it would be crippling anxiety.

5) Taking your music off the internet seems like creative suicide at this point, but I imagine there's something empowering about controlling supply. Anyway, I ask that question because to me there's this undercurrent throughout -- particularly in the lyrics of "Look Back" and "Better by Now" -- of the past meeting the present, and the essential questions being, "Have I learned anything? Do I make better decisions now than I would have five years ago." You and I are at this late-twenties nexus stage and I think those questions are in the ether. Fair?

Oof yeah, that about sums it up. I think when you're not on an obvious career path, where each step is laid out before you, you're bound to scrutinize every decision all the more. Better By Now was the product of financially responsible friends. Oh, you have stocks and bonds? You're buying an apartment? When did we learn how to do this stuff? I just opened my first savings account a few days ago and it was pretty much 100% because the banker was a musician who talked me into it. I've spent a lot of my life so caught up in music that I often feel like I've missed some of the practical lessons. But I wrote a song about it so I'm good.

6) This is your third or fourth album (don't recall exactly) -- have you found that you're any quicker or more efficient at writings songs than you used to be or is it the same old struggle?

I think I'm slower now actually. Maybe after this many years of writing, I'm better at recognizing a crap song when it comes out. In the past, I'd spend hours writing and recording something only to get home and realize that it's simply a terrible song. Utter garbage. What the hell were you thinking? I don't have time for that anymore, what with all the kids and jobs and properties around the world. I only follow through with something if I'm confident that it's good. At least to me.

7) Did you show songs to people as you came up with them, or write and record everything before getting feedback?

I'm so obsessive about (almost) finishing something in one sitting - it's maybe my biggest flaw as a producer. I wish I could record an acoustic demo, show it to someone, get ideas, build it gradually. But if I'm working on something I like, I can't leave the studio until basically all the pieces are there. I physically can't. I'll be giving it one last listen before I go home and I'll think, the 12-string would really be a great texture for this chorus and then I have to stay to finish it. And when I do, it'll happen again with something else.

8) Is it hard for you to know when a song's finished, or to accept that you can do no more to improve it? Do you have any mechanisms in place to keep yourself from overworking it?

I inevitably overcook a song. When you're recording, especially when you're doing it on your own, there are limitless opportunities to fill every nook with a hook and its easy to lose sight of a song's overall feel. So after going to far, I'll show it to someone (usually Anamaria), get their impression and begin paring it down. There's nothing worse than having every hook spelled out for you. A song is like any other piece of art - it's just as important to hide as it is to show. Unless magic is your art, then it's probably more important to hide?

9) Do you feel as though you got each of the songs on Grapefruit Rhythm to where you wanted them? Or will you go right back to working them over when this interview's finished?

No and definitely not. The songs could always be better and for most of them, I know specifically how (a solo, a bridge, some mixing issue, etc). But once a song a song is out of my head, I rarely return to it. I just want to make something new. That's why it's good to work with other people who will sit me down like the hyperactive child I am and say "Today we are just recording bass and drums and we are going to get it perfect." 'Look Back' and 'Valdosta Moon' were both done with a band and an engineer and it shows. If it were just me, I would have stopped halfway though so I could start something else?

10) What's more important to you: making great music or having fun making music?

Having fun making great music (you walked right into that one Raf you IDIOT!)
Posted by Salvatore Bono at 5:24 PM