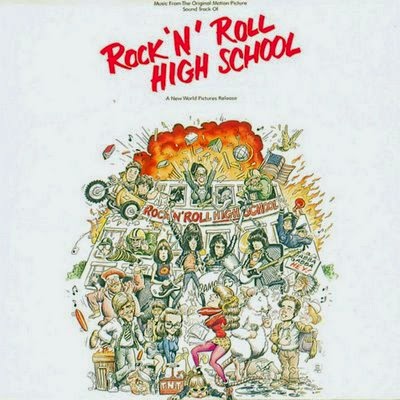 While The Ramones celebrated their first gigs 40th anniversary last month, none of the original and founding members of the band were unfortunately alive to celebrate it. Yet, the legacy of The Ramones still lives on. The band have sold more T-shirts than albums and are still one of the most talked about bands of all time, which is why they are legends. Yet, before they had reissues or massive "Best of" or Greatest Hits compilations, The Ramones had Rock 'N Roll High School, the soundtrack to the fantastically campy 1979 film based around a teen trying to get the band to play at her high school.

Though The Ramones are the centerpiece of the film, other music from that era appears on the soundtrack with artists like Alice Cooper, Brian Eno, Eddie and the Hot Rods, Nick Lowe, and others, in fact, The Ramones only have three songs on the soundtrack and one is a medley of their hits. However, just like the film, the soundtrack is still a blast to listen to and a great way to honor the punk gods from Queens.
Posted by Salvatore Bono at 6:04 PM