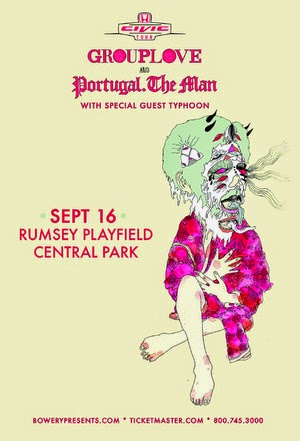 When you woke up this morning and saw the weather, going to an outdoor concert was the last thing on your mind. As the wind picked up, temperature dropped and rain fell in typical unforgiving New York fashion, standing outside would be the last of your plans on a Tuesday in September. Then, just as quickly and as hard as the rain came, it all cleared up and blue skies suddenly appeared and like the rain, all of those doubts about your evening plans suddenly went away. The Honda Civic Tour co-headlined by Portugal. The Man and Grouplove pulled into Rumsey Playfield in Central Park and was the final outdoor concert of the 2014 season.

At 7 p.m. sharp, Grouplove took the stage to bring their jam band-meets-soul-rock inspired groves to the park. The band, who were in town exactly six months ago, brought the same energy, fun, and joy they did to Terminal 5 but this time on their outdoor set. With enough laser beam lights to signal a satellite in the sky, Grouplove had the crowd in pure in pure bliss. Singer and guitarist Christian Zucconi cut off his normal long locks for a crew cut looked like a totally different person on stage, while singer and keyboarding Hannah Hooper wore a Beyonce inspired outfit, kept telling the crowd, "This night is bittersweet for us. It is the last night of the tour and we really have become like family with Portugal. The Man." While her look liked like Queen Bey's, the band also paid tribute to the singer with a rousing performance of "Drunk in Love." With nearly all of their singles played and Zucconi and Hooper feeding off the crowds energy, dancing around, jumping into the audience and bouncing on stage, it was a fantastic way to shake off your end of work jitters. After an hour on stage, they retreated to wings, only to come back a few moments later with members of Portugal. The Man for an encore of The Who's "Baba O'Reilly." The cover song motif would last through the night as Portugal. The Man would show during their performance.

After a 30-minute break between bands, Portugal. The Man walked on stage at 8:30 and instead of breaking out into one of their own numbers, they jumped into a cover of Pink Floyd's "Another Brick in the Wall Part 2," which then would become the long intro to "Purple Yellow Red and Blue," it was then straight into "All Your Light." Just as they were warming up within their set, they broke out "Evil Friends," which included a cover of It's Always Sunny in Philadelphia's "Dayman," thrown into the mix. With trippy images being projected behind them and the same laser lights Grouplove used were now being blasted into the crowd for a different band. As a majority of the songs coming off last year's fantastic Evil Friends and 2011's In The Mountain In The Cloud, the band were playing their largest show to date in New York City. Bassist Zach Carothers would express the same sentiments as Hannah Hooper did explaining to the crowd how important this tour was for them and how it brought on a family like atmosphere between the two bands. While the songs always sound fantastic live from this band, one of the amazing things about them is how you can see them nearly every night of the week and it will always be a different concert. We have been covering this band consistently since 2009 and never have we left a gig of theirs disappointed or underwhelmed, they known how to put on a great show and pack a surprise. One of those surprises was a cover of Oasis' "Don't Look Back in Anger," which had all of Rumsey Playfield singing along to the chorus. Carothers joked, "We wrote that song a long, long time ago." While their main set, like Grouplove, lasted an hour, they retreated to the wings and returned for an encore that sent the audience to the heavens. Carothers and singer John Baldwin Gourley came out again to thank everyone on the tour and express their gratitude to everyone involved and how much they love New York City, "This is the greatest city in the world," Gourley said before breaking into the opening chords of "Sleep Forever," which lead to a gigantic build-up that brought them singing The Beatles' "Hey Jude." As you walked out of the park and the bands were long off stage, the crowd was still chanting "Nah, nah, nah, naaah! Hey Jude!," as they returned home.
Posted by Salvatore Bono at 8:40 PM