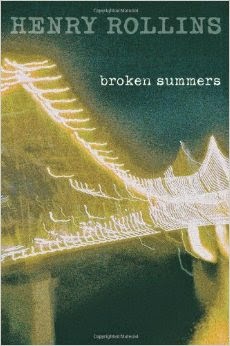 Henry Rollins is known the world over as an influential singer and writer, and Renaissance Man, but he is also known as an activist and when he has something on his chest, he needs to get it off. In 1993, three teens from West Memphis, Arkansas, were convicted of murdering three boy scouts in their town of Robin Hood Hills. The convicted, Jason Baldwin and Jesse Misskelly were sentenced to life behind bars while Damien Echols was sentenced to Death Row. Thanks to a power HBO documentary, Paradise Lost, the teens story was told to America. The teens were then dubbed, "The West Memphis Three." When people saw it, many realized that these teens were the subject of a witch hunt and wanted further evidence to show if they actually were the murderers. Many celebrities including Pearl Jam's Eddie Vedder, director Peter Jackson, Dixie Chicks Natalie Maines and Henry Rollins banded together to find the truth. In 2003, Rollins released his book Broken Summers, which is about the making of, touring, and release of his West Memphis Three compilation, Rise Above, which was Rollins and guests doing covers of Black Flag tunes.

Unlike his other life on the road book, Get in the Van, many of these stories cover a global scale of massive highs and plummeting lows and is told in diary entry, like most of Rollins' books, and details nearly a daily account of what his life was like making and touring behind Rise Above. From playing Black Flag songs he had not done in a while to working with guest musicians to sing on the record and then dealing with various people whose opinions conflicted with Rollins', this book see's his exhausting efforts for the truth to be set free. With all of the proceeds of the album going to the legal team for the West Memphis Three as well as a percentage of book sales from Broken Summers, this book showed how people on the outside did so much for the three unjustly locked up on the inside and helped spread their word.

In 2011, West Memphis Three were released from prison thanks to the outpouring of support and fundraising efforts for the case to be reexamined and that no evidence directly linked the Three to the murders of those children.
Posted by Salvatore Bono at 5:56 PM