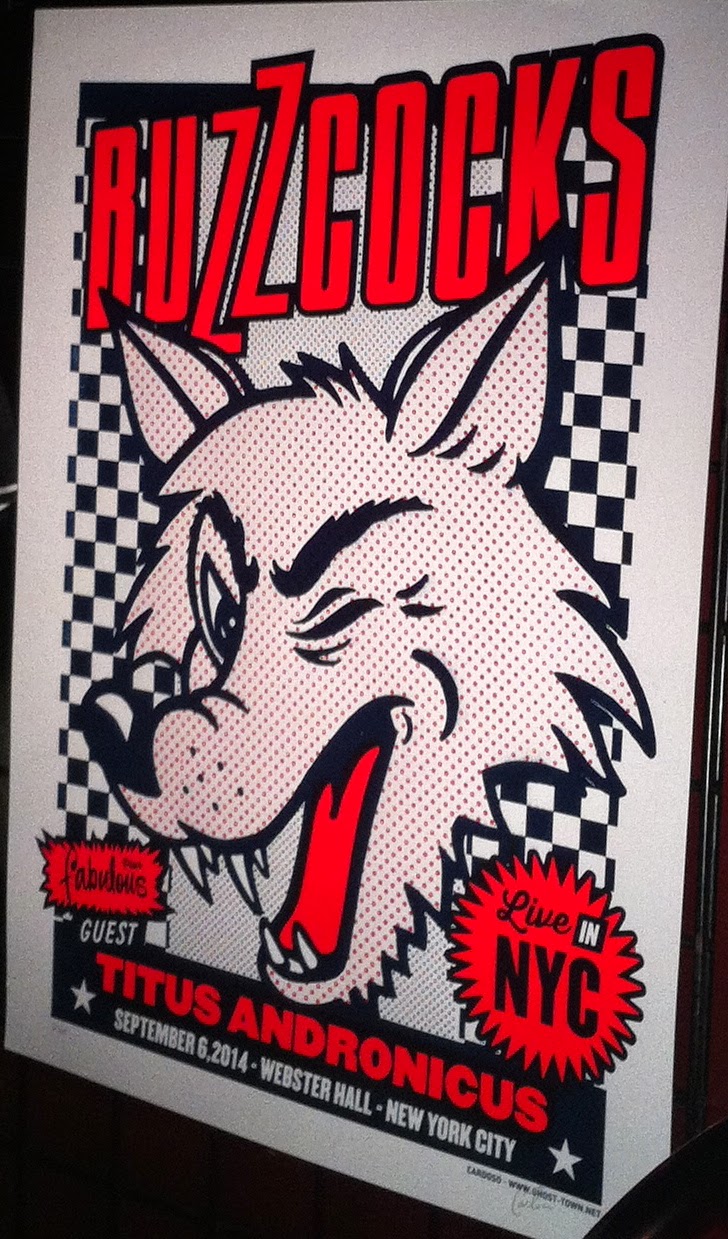 On a Saturday night in New York City anything is possible, Hell, that is also any night in the Big Apple! But if you are a punk fan, it didn't get any better than English legends Buzzcocks returning to Manhattan to play with New Jersey punk favorites, Titus Andronicus at Webster Hall. While the gig was surprisingly not sold-out, it sure was packed inside the iconic Downtown venue and everyone that was there were ready to get loose to watch their heroes on stage.

As the clock struck 8 p.m. Titus Andronicus came on to the stage and while they have headlined the venue before, it must have been a totally different experience being an opener, especially as the crowd was dwindling in. Those who arrived early knew what they were in for with Titus, as their special brand of epic punk meets stadium rock got the audience in motion. In a small, 30-minute set the band hardly stopped for breaks and let the music do the talking. While it may not have been a typical Titus gig, per say, they still elevated the room with their music. Songs like "A More Perfect Union," "My Time Outside The Womb," and "Still Life With A Hot Deuce On A Silver Platter," need to be heard live because it is concert where they come alive. As their set wrapped up, it was full momentum for Buzzcocks to arrive.

As 9 p.m. hit, out came the icons. Buzzcocks, who formed in the mid-70's in Bolton, England, brought sexually charged lyrics, a mod look, and raw power pop to punk and would eventually have a tremendous impact on Manchester's "Madchester" music scene of the 70's and 80's. In many ways, Buzzcocks were the first pop-punk band and thanks to the compilation, Singles Going Steady, where their singles would be immortalized, every generation since their conception has taken note to what they brought to music.

As they hit the stage opening with "Boredom" and then, "Fast Cars," Buzzcocks seemed to have not lost their touch. Just pure adrenaline and excitement charging them on stage and the audience loved every second of it. The band, who are on tour in support of their new album, The Way, which has not been released in the U.S. yet, even guitarist Steve Diggle joked about it saying, "Here is a new song that you can't buy!" before going into "Keep On Believing." With a handful of new tracks played through the night, the latest songs sound as if they were kept in an archive from the bands heyday and seem to have not lost their touch, the same was true to their performance. As singer and guitarist Pete Shelley's voice sounded fantastic and Diggle would run around on stage and lift his guitar as if he was 21 years old again. In the 90 minutes they were on stage, they burned through 25 songs hardly without any stoppage time. This is a band that could have come to New York and phoned in their performance based on their name and their legacy, but instead they did the opposite. They wanted everyone to know they still got it, and they sure do! Even the classic songs like "What Do I Get?," "Every Fallen in Love," and "Orgasm Addict," sounded just as good now as they did when you first heard them on record. Buzzcocks proved that age is just as a number and proved they still have what it takes to be a great live band.


Boredom
Fast Cars
I Don't Mind
Keep On Believing
People Are Strange Machines
Autonomy
Get on Our Own
What Ever Happened To?
The Way
When Love Turns Around
Why She's the Girl From the Chainstore
Sick City Sometimes
Nothing Left
Third Dimension
Noise Annoys
Breakdown
You Say You Don't Love Me
It's Not You
Chasing Rainbows / Modern Times
Promises
Love You More
What Do I Get?

Encore:
Harmony In My Head
Ever Fallen in Love (With Someone You Shouldn't've)
Orgasm Addict
Posted by Salvatore Bono at 9:47 AM