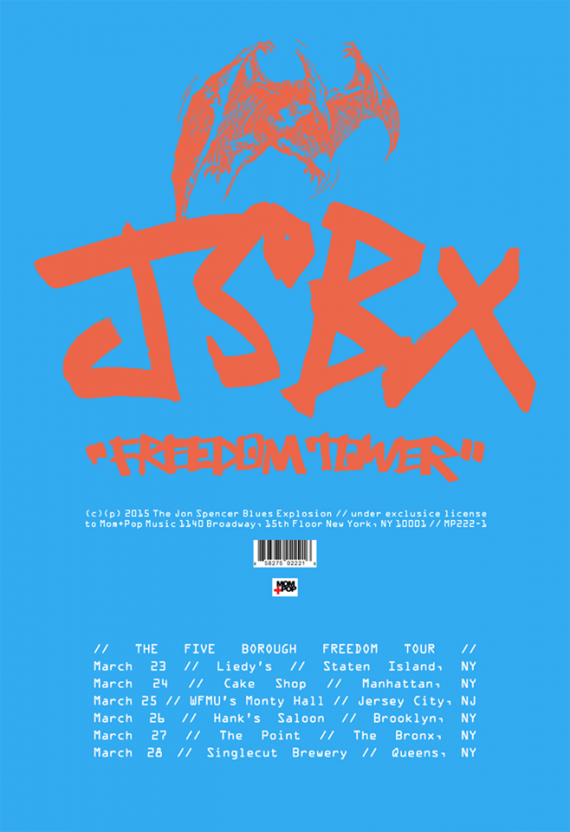 Since 1991 Jon Spencer Blues Explosion have been a band that took all the best of what the New York City underground had to offer and brought it to the forefront of modern music. The band, who just released their latest album, Freedom Tower: No Wave Dance Party 2015, took to the small clubs and unconventional music venues of the five boroughs of New York City and brought their new record to life in ever borough. For the final stop on the "Five Borough Freedom Tour," the band played inside SingleCut Brewery in Astoria, Queens, to go out with a bang.

"We saved the best for last! A brewery! Tonight is brought to you by Miller Lite!," Jon Spencer jokingly told the packed room inside Queens' first brewery since prohibition. The band kicked things into high gear right away. Performing most of their new album, the energy inside the unconventional music venue was at fever pitch. The trio played on platform which was above an office and restroom inside the tap room. With people crammed in, drinking and all with great vantage points, the band let loose -- after all, it was the final night and a Saturday night! For the 75 minutes they were on stage, Spencer would climb over the barricades, climb across anything he could and play in the audience. He would wave a giant American flag they had hung over their stage area, but with all of his antics, the trio's tight and perfect blend of garage rock and blues had everyone in awe.
Posted by Salvatore Bono at 8:36 AM