Recommended Reading: Touching From A Distance 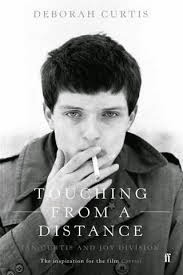 Most music biographies and autobiographies are told from the perspective of what it is like inside the band and the forces on the outside that may have influenced decisions. Very rarely is a biography written about a musician that is on the outside looking in. Twenty years ago, Deborah Curtis, the wife of late Joy Division singer Ian Curtis, told her memoirs. She explains what it was like being the wife to the singer of a band that was one of the most rapidly growing and successful bands in Europe and married to a man that suffered depression and epileptic seizures which played a factor into Ian's suicide on the eve of Joy Division's first U.S. tour.

Touching From A Distance, which would later be the basis to Anton Corbijn's directorial debut, Control, is one of the most heartbreaking and candid stories you will read about this band. Deborah details her beginnings with Ian, his rising fame, medical conditions, infidelities, and volatile personality. This is a must read for any fan of this band and Deborah treats fans to lyrics and handwritten notes Ian had of songs never recorded. A unique and powerful look on what it was like being on the outside of the band but still within the inner circle.
Posted by Salvatore Bono at 8:10 AM