Sad news to report, British rockers Exit Calm are calling it quits. The band, who released two albums, partied ways and announced it on Facebook earlier this week. The band stated: "It's with a heavy heart that we announce to all our brilliantly loyal fans, and all the excellent people who have tirelessly invested time and money into our music, that we have sadly parted ways with Nicky Smith - a brilliant front man with whom have written 2 solid albums. Therefore we also announce the conclusion of exit calm." In 2011 we interviewed the band, take a look at that HERE.

Speaking to Rolling Stone, Deftones Chino Moreno said that the band's follow-up to 2012's brilliant Koi No Yokan will arrive this fall and will be different from previously releases. The singer said, "I think it's a little more of a heady record. I feel like we've gone into the songs and really dissected them. If something sounded a little straight, we took a left turn and made things a little screwy. We just tried something completely opposite, not to sabotage it, but to challenge ourselves and try new things that we haven't done in the past. It definitely feels like we've taken a step from our last record. ut it's definitely a Deftones record, and it has all the elements that make us who we are. We're not going out there to change anything, other than just thinking outside the box."

Green Day's Billie Joe Armstrong will open a guitar shop next month in Oakland, California, called Broken Guitars. Armstrong is opening the shop with fellow musician Bill Schneider who told East Bay Express, "We want to be a shop for musicians. The focus is used American guitars: Gretsch, Fender, and not necessarily just vintage ones."

Later this month, Modest Mouse will release their first album in eight years and speaking to HMV, singer Isaac Brock says the follow-up to Strangers to Ourselves will arrive hopefully sooner than fans expect. He said, "I’m pretty far along with the next one as it is. I went in to making this one with two records in mind. It’ll be released as quickly as it’s legally allowed to be. It’s a partner to this one."

Snoop Dogg has been confirmed as the SXSW keynote speaker next week in Austin, Texas. The rapper also released the title and cover to his upcoming Pharrell produced album. The record, BUSH, will arrive in May. Take a look at the cover below: 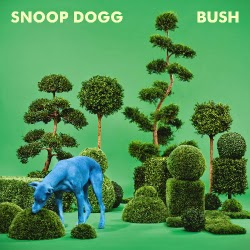 Posted by Salvatore Bono at 6:14 PM