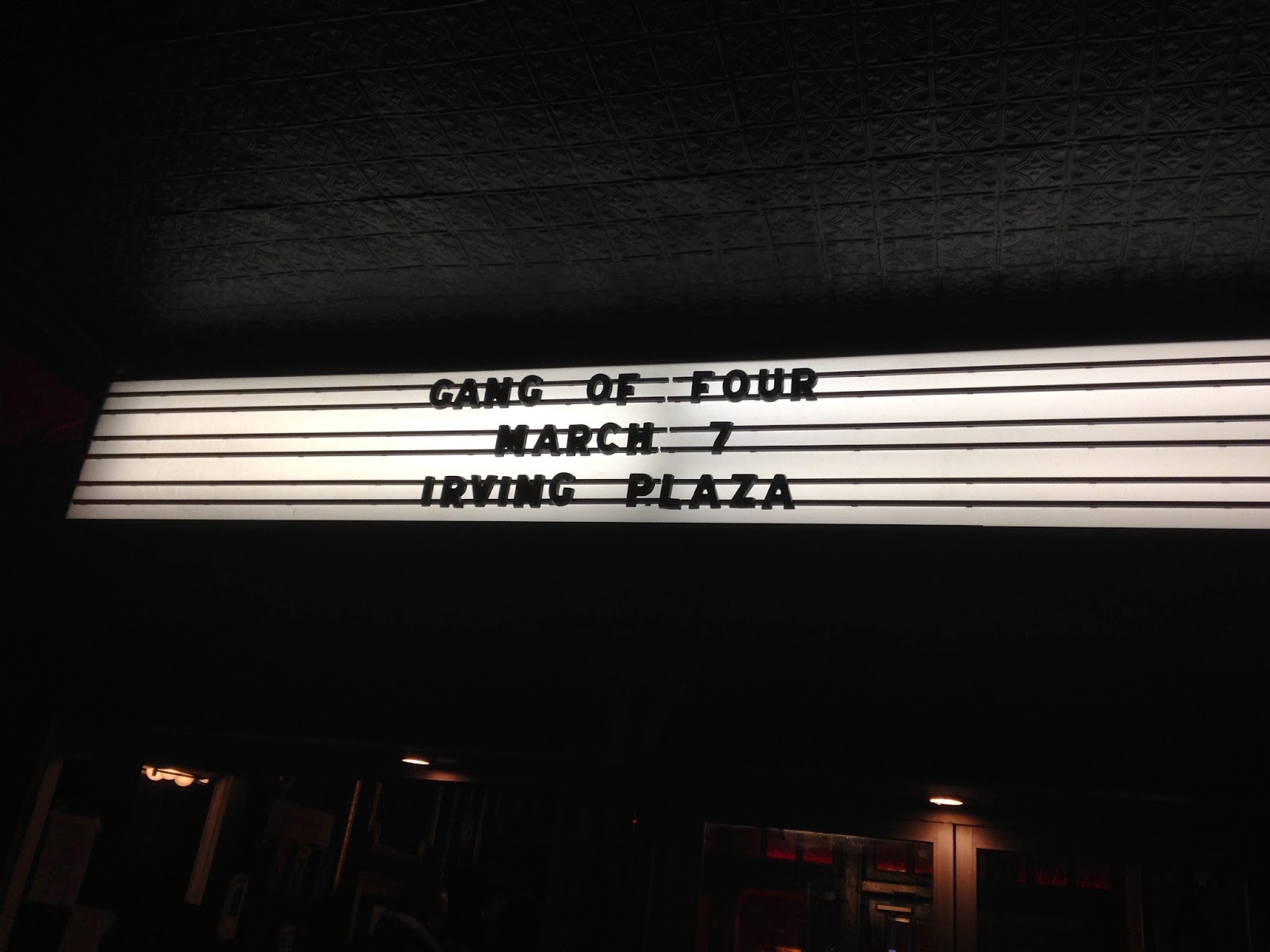 As New Yorkers look to live out the final weeks of a brutal winter, things heated up inside Irving Plaza as Gang of Four returned to city in support of their new album, What Happens Next. The iconic post-punk band, who are just down to original member Andy Gill, returned with an altered line-up that saw new drummer Jonny Finnegan simply add a whole new level of backbone to the band. In an event that was packed from wall-to-wall and streamed on Yahoo!, the band were ready for their close-up.

Arriving on stage at 9:30, the band took their places and had that bonafide rockstar look as they stared down the audience and opened with one of their new tracks, "Where The Nightingale Sings." The opening numbers including, "Not Great Men," "I Parade Myself," and "Paralyzed," were a crescendo into what was to come. The slow but artistic start to the set was no surprise to longtime fans of the band as Gang of Four were showing off their musical chops straight away before bringing their entertaining quality they are known for. Yet, once the Gang of Four factor they are known for kicked in, it was enough to make any skeptic of this current line-up become a fan. Singer John "Gaoler" Sterry looks like he could be Gill's son, even down to his "I don't give a fuck" attitude which works wonders for a band that really never had a fuck to give in the first place. As Goaler eased into his front man status through the night, it became evident that his internal crescendo would build song after song. As he broke microphones and stood on the monitors while dancing around the stage, almost knocking into Gill's swinging guitar a few times, it seems this is the best job he has ever had. While bassist Thomas McNeice is an absolute beast on his axe,  his thick basslines and supporting rhythms make you forget he wasn't a founding member, but the star of the show is Gill himself. From his brilliant guitar playing that has influenced everyone from Tom Morello, St. Vincent, Peter Buck, Bloc Party, and countless others, it is Gang of Four ruled by one.

As the night progressed with classics like "Isle of Dogs," "To Hell with Poverty," "I Love A Man in Uniform," "Return the Gift," and the show closer, "I Found the Essence Rare," Gang of Four made their mark on New York and as they march on across the country and into SXSW later this month, this is a band not to be missed.

Encore:
Why Theory?
I Love a Man in Uniform
Return the Gift

Encore 2:
I Found That Essence Rare
Posted by Salvatore Bono at 9:58 AM